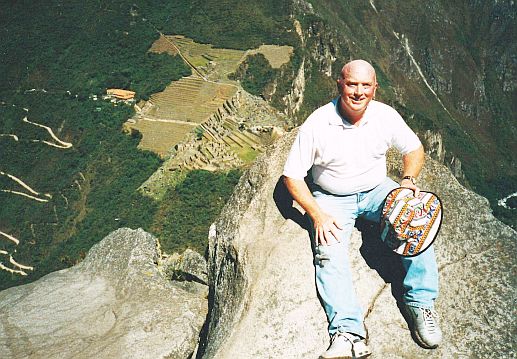 After a 45-minute climb, I am sitting atop Huayna Picchu – note Machu Picchu, a thousand feet below and behind my right shoulder.

I am taking a break from health, wellness, and pandemic subjects to write about another passion I have – travel. I have been fortunate to have been to 61 countries in my life, mostly thanks to the military. My wife has been to nearly half of them. She had no interest in Vietnam, Bosnia, and places like that.

About a dozen years ago, we were fortunate to visit Peru with our former next-door neighbor. She is a Peruvian doctor and still had a home in Lima. We spent about ten days roaming around the country from Lima to Cusco to Machu Picchu. Let me jump right into my headline promise. I climbed Huayna Picchu, the mountain behind the iconic photographs of Machu Picchu.

I did not know it existed until about a year before we traveled to South America. I had been flying somewhere on business, and there was an article in the airline magazine about climbing Huayna Picchu when you visited Machu Picchu. That article remained in my brain until I set foot in Machu Picchu and saw the mountain, Huayna Picchu, just a short distance away.

We had been in Peru almost a week when we took a train from Cusco (11,200 feet above sea level) to Machu Picchu. We left before zero dark thirty (military-speak for super early in the morning). It seemed like we spent most of the time inching our way up out of the crater-like depression surrounding the city of Cusco. I cannot remember how many switchbacks the train did to get out of the valley, but there were many.

A bit over three hours later, we arrived at the base of Machu Picchu. Busses took us to the top – about thirteen switchbacks to get to the base level of Machu Picchu (about 8,000 feet above sea level). I did a quick scan of Machu Picchu and headed directly towards Huayna Picchu. You must log in and out – and you cannot climb it after three or four o’clock in the afternoon.

The climb starts with a 500-foot descent from Machu Picchu to the connecting mountain, Huayna Picchu. Then it is nearly 1,500 up from there. The first third or more of the way, there are steps and even some handrails. One step might be a foot high and the next five or six inches higher or lower. Regardless, it was an exercise in climbing stairs for over 500 feet.

The upward trail was wide enough in places for groups of people to pass – those coming from the top and those who move faster going upwards. I ran into many different nationalities. Several stopped and chatted for a brief minute or two. Many of them said, “Take the right at the Y.” I had no idea what that meant.

The trail narrowed as I approached the top. I was glad I continued to look upward and not outward or downward. I might not have made it to the top if I had. I came to a stop – the Y – realized precisely what people were advising. On my way down, I, like others, told people ascending to go right at the Y.

The Y was an option in the ascent to continue on the trail that wove around the mountain or go left and literally climbs the mountain’s face to reach the top quicker. I am not a mountain climber, had no experience nor equipment even to consider that option.

As I approached the far side, there was an offshoot that opened upward. With a bit of help from the rock wall behind me, I could scoot up a bit and climb to the top. The mountain top had a large area – enough for a dozen people to sit comfortably.

I had left without water, food, and my camera quit when I was even with Machu Picchu. I took the batteries out, cleaned them, and reinserted them into the camera. It worked well enough to get a few shots from the top – like the one I am featuring in this article.

I am sitting on the top edge of Huayna Picchu. A young woman offered me an apple and half her bottle of water. She also took my picture. I spent about twenty minutes on top of Huayna Picchu and started my descent. As I came around from the tunnel entrance from my ascent, I saw the entire world open before me.

It was a rush and a half. I am almost paralyzed to realize that any slight loss of footing could have resulted in catastrophe. I was now hugging my body as close as I could for around fifty to one-hundred feet as I inched my body along the path to a lower level that had more space to stand. Once I reached that level, my blood pressure, anxiety, and visual tension subsided. I was able to walk without part of me hanging over the edge.

The trip up took me a little over 45 minutes. I want to do it again with food, water, and a backup camera. We spent another hour wandering around Machu Picchu before we boarded the bus to return to the train station. The trip back was better since all of it was in daylight. The outbound leg was in darkness for almost half the journey.

Cusco is an exciting place. The plane flight is one hour and to drive the 667 miles takes about 16 hours. The rim around the top of Cusco is home to many fascinating Incan ruins. One is called Saqsayhuaman (sexy woman, phonetically) and is over 12,100 feet above sea level. Massive stones, one-hundred tons or more, are form-fitted together to make a small city. No mortar is used between the stones – they fit together like a hand in a glove.

We traveled around the local area for a few days before returning to Lima. Our neighbor told us to be aware that Cusco can be at the whim of weather in a heartbeat. She had experienced one trip when the outbound flight left earlier than posted from a different gate. Whoever heard of that happening?

Now, from personal experience, it happened to us. We were at the airport over an hour early. We had a nice view of our departure gate and were keeping up with the arrivals and departures – there were not many. I heard something that sounded like our flight being called and asked our neighbor about it. She got up and checked on it.

Yes, our flight was boarding, almost an hour early, from a different gate. Yes, we did make that flight. We found out later that a storm came through and shut the airport down for a couple of days.
Peru has 55 varieties of corn and 4,000 varieties of potatoes. We did not try all of them. Chicken is one of the prime meats. There is also another animal, cuy (kwee, phonetically) that resembles a guinea pig. They are not pets but raised as food. We saw a few crawling around in some homes (over 500-year-old dwellings). Yes, it tasted like chicken.

We had plans to travel south to the Nazca Lines. A few things happened, and we ran out of time. There are several other places I would love to see during my next trip to Peru. When you arrive at Machu Picchu, give serious thought to climbing Huayna Picchu. It will be a memory you will treasure for a lifetime.